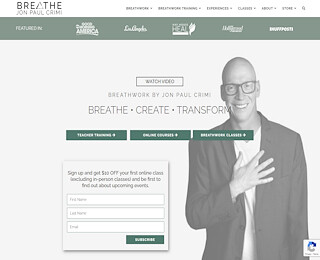 Meet Jon Paul Crimi, the breathwork instructor who is shaking up the LA community, transforming lives in Hollywood, and giving hope to masses of people across the globe who are looking to make a change but don’t know how or where to start. Jon Paul’s masterful technique is nothing short of miraculous for those who come to his classes feeling disillusioned, broken, worn-down, or just plain frustrated by what life has dealt to them. It’s not about achieving perfection, it’s about choosing a new direction and working toward that goal. Learn to breathe with JP as the first step in your path toward wellness.

Who is Jon Paul Crimi?

A former Celebrity Trainer and Sober Coach from Boston turned breathwork instructor, Jon Paul is a man who has carefully measured the trajectory of his life and decided he was not satisfied with where it would take him, left to its own devices. After a breathwork class that transformed him, Jon Paul’s life work became clear: changing the lives of those he would come in contact with, both in-person and online.

A man with a vision, Jon Paul Crimi was not content with the opportunities LA and surrounding communities afforded him, but began offering his sold-out breathwork classes online, as well, to impact as many lives as possible. Through live Web classes, in-person sessions, Teacher trainings, and retreats, Jon Paul has touched the lives of countless people from all walks of life and too many global locations to count.

Along with online breathing classes that empower clients to let go of emotional baggage and negativity, Jon Paul teaches clients how to become a breathing instructor through basic breathing workshops and classes for leading workshops and group sessions. It is a generous teacher, indeed, who believes there is room for others at the top; such is Jon Paul’s heart for all who seek to follow in his footsteps.

Those who are skeptical of the ‘new age’ attachment to breathwork often find Jon Paul’s technique to be refreshing. He reiterates during his sessions that you’re ‘just breathing’, and that there’s nothing scary at all about lying in a safe place and breathing. Don’t expect to sit immersed in ice water or take part in weird group experiments during one of Jon Paul’s classes; rather, you’ll be engaged in life-transformational breathwork, a task that sounds oh-so-ordinary and yet is anything but that.

Read more about Jon Paul Crimi’s emergence as the breathwork instructor to the stars, big-name corporations, and everyday people looking for a way to get out from ordinary and extraordinary burdens that life drops in their lap on a day-to-day basis.

Take a breathwork class from the comfort of your own home to experience the life-changing work that Jon Paul performs. True to his humble manner, he’ll tell you it’s not what he does that brings about huge changes, it’s the breathwork itself that is transformational. Reach out to Breathe With JP for corporate retreat information, upcoming breathwork training dates, and live online class details: 310-625-6751.